The HUBZone contracting program, while well-intended to provide economic and employment opportunities in otherwise low income, high unemployment areas, must nonetheless connect HUBZone firms with government contracts, the overwhelming majority of which are not located within a HUBZone.

If HUBZone firms are to experience growth, they will need to utilize the local labor force in the area where the contract is to be performed, in addition to utilizing the labor force residing in their HUBZone to perform indirect labor functions.  As a company’s direct labor force grows, their indirect labor will also grow, producing more employment opportunities within the HUBZone, thereby fulfilling an intent of the program.

The HUBZone program was designed to promote economic development and grow employment opportunities in metropolitan or rural areas with low income, high poverty rates, and/or high unemployment rates, by targeting federal contracts to small businesses in these areas.  This is a conceptual shift where contracting preference is targeted at geographic areas with specified characteristics, as opposed to targeting it to people or businesses with specified characteristics.

The government-wide goal for most agencies is to award at least 3% of their eligible federal contracting dollars to HUBZone-certified firms [see 15 USC 644 (g)].  Almost all federal agencies participate in the HUBZone program.  Although several individual agencies often met or exceeded this goal, it has never been achieved government-wide.

The following table shows the performance of HUBZone against other small business goals in fiscal year 2015. 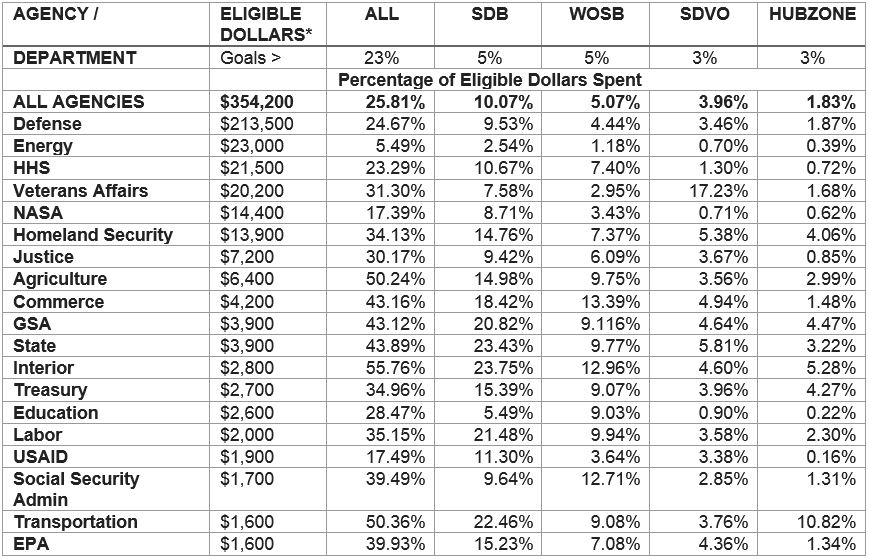 Early program critics questioned if the program would offer enough incentive for business to choose to locate/relocate in areas they would otherwise avoid.  HUBZones are rarely located at or near Federal installations or business locations; could the failure to achieve the government’s goal be mitigated by amending the 35% requirement against all employees employed by the business, to a 35% requirement against indirect employees only?  Here is a practical example:

Company “R” is a small business whose principal office is located on an Indian Reservation in South Dakota approximately 200 miles from the nearest Federal installation or location of business.  Company R has 20 employees at its principal office:  1 executive, 3 finance, 2 HR, 1 compliance, 3 business development, and 2 project managers and 8 direct employees who work in the company’s primary business line. All the employees (10 indirect; 10 direct) live on the reservation.  Meeting the all requirements to include the 35% mandate, the company certifies as a HUBZone.

Implementing its growth strategy, Company R subcontracts to a prime for a contract whose place of performance is Huntsville, AL.  The subcontract is to provide 100 full time equivalent (FTE) employees.  None of the new direct employees live in the HUBZone where Company R is located, nor in any adjoining HUBZone.  As a result, of the 120 employees, only 20 (16.7%) live in the HUBZone.  Company R can no longer certify as a HUBZone company.

This example, shows that as a practical matter, a company in a HUBZone is not incentivized to secure a HUBZone certification when performance on a federal contract will likely not be located near or in the HUBZone.  With 20 employees all residing in a HUBZone, Company R is capped as a 57-person labor force – in other words, either priming or subbing on a 37 FTE contract vs. the full 100 FTE.   However, if Company R were to ONLY count its indirect employees as the basis for the 35% requirement, it could continue as a HUBZone concern.

Therefore, to expand the HUBZone program, legislation should be submitted to amend the Small Business Act and 13 C.F.R. 126.200 be amended to require a HUBZone small business to:

If these changes are made, HUBZone businesses will have the potential to grow their companies and better serve the economic development needs of the areas in which they are located.  As these companies grow, their workforce from the HUBZone area will also grow to meet the company’s management and overhead needs.  Finally, these changes will better position government agencies to make their HUBZone goals.