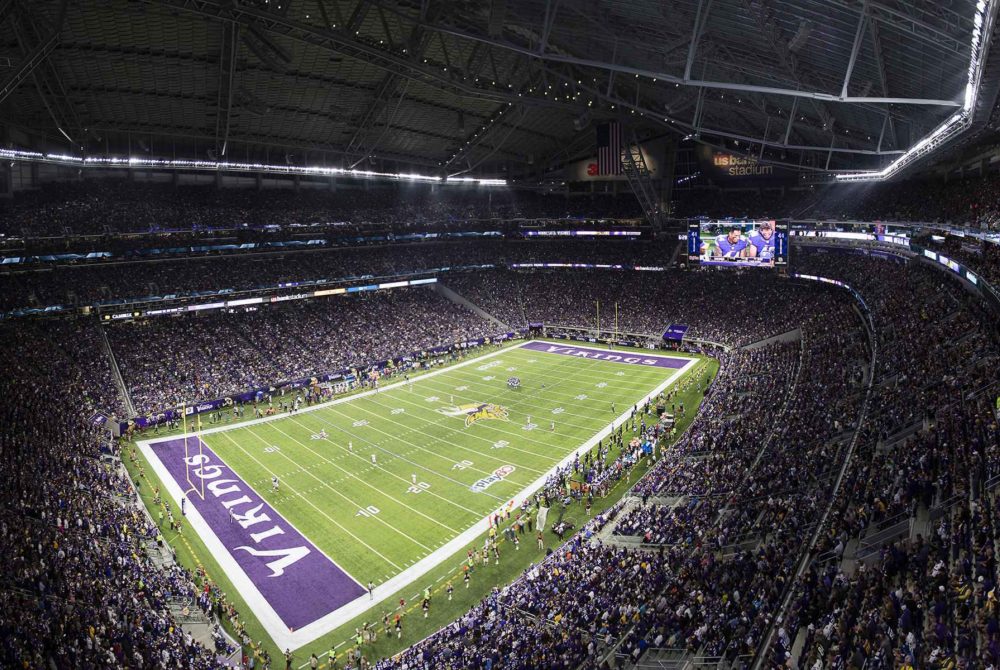 When two teams square off for the NFL championship on February 4, they’ll compete under the bright lights of Minnesota’s U.S. Bank Stadium, the first major sports facility to use LED lighting from the outset. As a result, players and fans — including 66,200 watching in person and millions more watching on high-definition television — will experience a big game unlike any of the previous 51 editions.

Meanwhile, metal-halide lights, released to the public in 1962, were already illuminating gridirons across the United States. Because they yielded a more natural color rendering index and used less energy than incandescent bulbs, many stadium operators rushed to adopt metal-halide lights for night games.

But the 1990 invention of the white LED marked the true beginning of the modern era in sports lighting technology. And 25 years later, high-performance stadium lights illuminated an NFL championship game for the first time, at Arizona’s University of Phoenix Stadium.

“Facility operators and teams have seen how LED lighting enhances the game presentation, for both fans in the venue and those watching on high-definition television,” he said. “This, coupled with cost savings, controllability and leaguewide goals of minimizing the green footprint of professional sports, makes LED lighting a logical solution.”

Advanced LED lighting systems, like those pioneered by Ephesus Lighting, improve TV broadcasting in the 4K era and enhance the fan experience.

“The sports lighting solution at Minnesota’s U.S. Bank Stadium represents one of the most complete systems currently installed in any professional sports venue,” Lorenz said. “It allows for a host of innovative, entertaining and colorful lights shows for the fans. Additionally, all fans will see a better and longer halftime show (during the NFL championship game), as our system allows the stadium to go from complete darkness to light with the flip of a switch.”

LEDs also lower long-term operational costs for stadium owners. Competitors benefit, too: increased clarity on the field helps a scrambling quarterback find the first-down marker or a sprinting receiver bring the ball down out of the sky.

For now, at least, indoor NFL stadiums are transitioning to LED lighting more quickly than their open-air counterparts. But Lorenz expects all NFL venues to adopt LED lighting systems within the next three to five years.

Until then, participants and fans alike will have to settle for LED lighting some of the time, depending on where their home games are contested. Meanwhile, when the last meaningful game until September kicks off in Minneapolis on February 4, the power of advanced stadium lighting systems will be on full display, the shining beacon of a bright future for sports venues.